The Wedding guests gathered in a field below Dundry Hill. It was Saturday evening, and a great fire had been lit, for the Wedding was over and the revels had begun. A Harper played in the field and so they danced into the night. As the time approached midnight the Harper reminded the dancing guests that it would soon be Sunday. The guests were very merry. They called for the Harper to continue, saying, "We shall dance till dawn, though we should have to call the Devil himself to play for us".

The Harper declined their request. He packed away his instrument and started to leave, treading his way quietly through the already damp grass of the field. As he moved away he heard the faint sound of piping behind him. He looked back. In the light of the fire saw the shadowy figure of a Piper moving to join the company. They welcomed him with open arms and so the dance went on. The Harper hurried on his way.

Situated south of Bristol the stone circle complex at Stanton Drew is among the most impressive in the British Isles. Second in size only to the Avebury complex it consists of a great circle 360ft in diameter with 27 stones, a smaller circle positioned roughly east north east of the great circle (100ft diameter with 8 stones), and another south west of the great circle (175ft diameter with 11 stones). It also has an avenue leading east towards Chew, a quoit, of which little remains, some 390yards to the north east and a cove consisting of 3 large stones about Ľ mile south west, conveniently situated in the garden of the local pub "The Druids Arms". 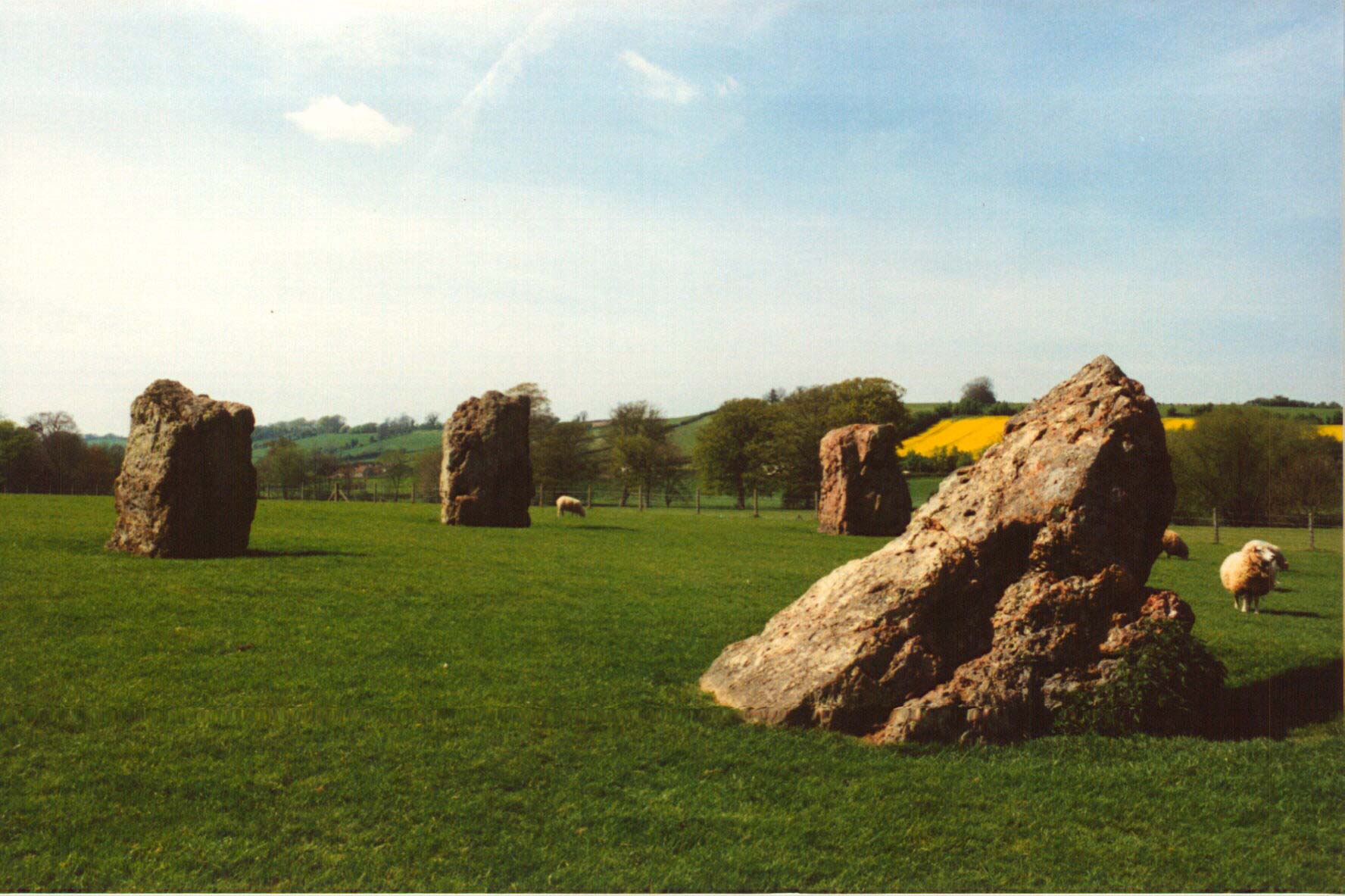 View of the most northern circle looking west.

Marked on early maps as "The Weddings" the various components also have their own names. The circles are called "The Fiddler and the Maids" and the stones of the Cove are called, not unnaturally, "The Parson, The Bride and The Bridegroom (or Cooke’s Stone).

The age of the site varies, depending upon whom you read, between 1200 B.C. and 2000 B.C. and, not unlike the other similar sites around the UK, its usage has been the source of much debate. Sir Norman Lockyer postulated that, in common with the great temples of Egypt, the circles of Stanton Drew were erected to mark specific calendar dates, in this case the rising of the star Arcturus in May to start the season of growth and fertility. The observer for the event would be situated in the Cove. It may be, however, that this idea was generated to suit the concept of the fertility rituals that were supposed to have taken place at this site. 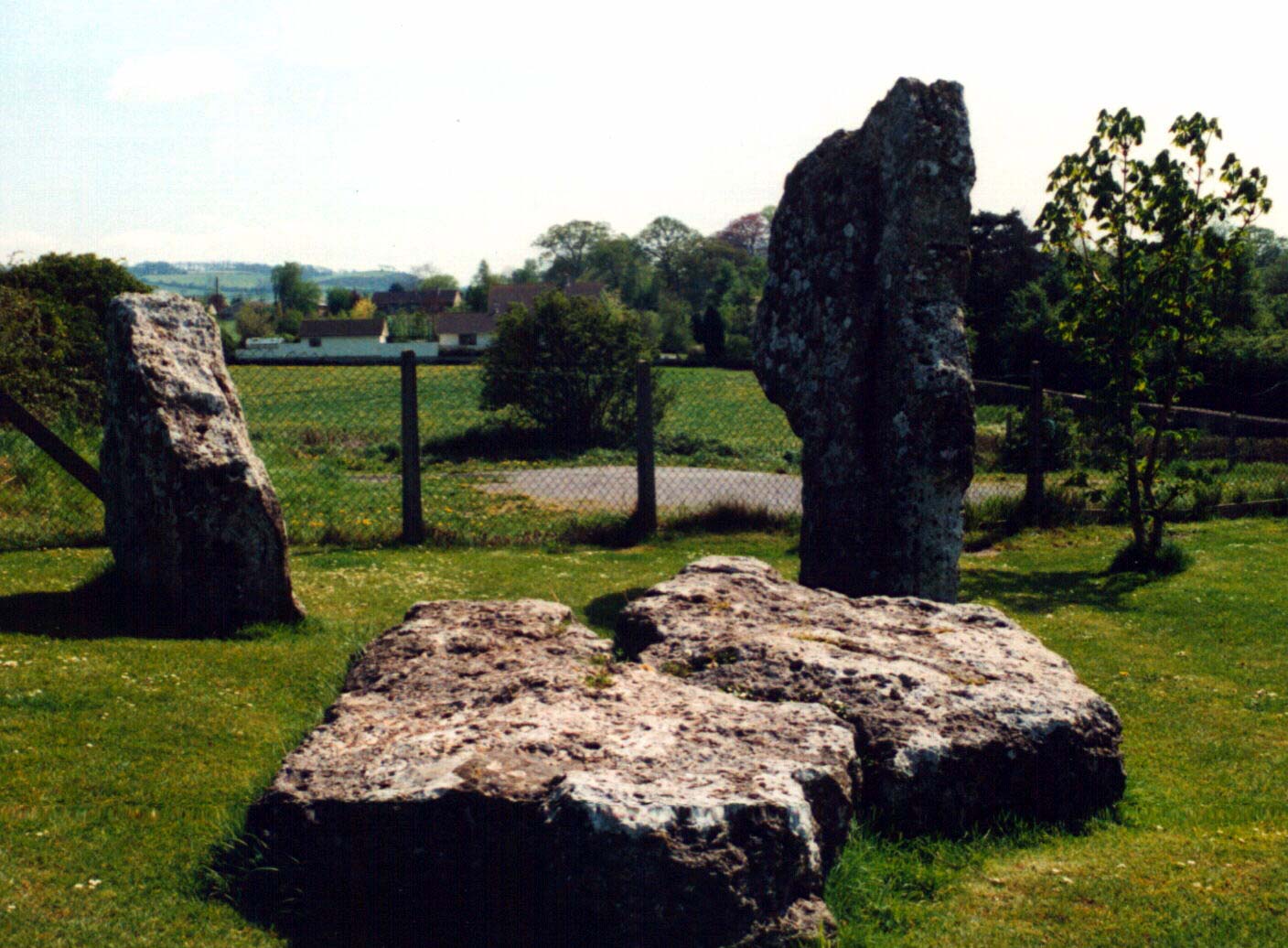 "The Cove". Situated in the garden of "The Druids Arms".
Here looking south.

Other ideas concerning the use of the Cove associate it with burial practices and rites. The Cove faces approximately south. Any ritual that took place within it would not have been visible from the circle complex. This shows a marked similarity with funeral sites located in both Britain and Brittany.

Now another piece of the Stanton Drew puzzle may be fitted into place. In November of 1997 English Heritage announced that a major Breakthrough had been made at the site. Using the latest "hi-tech" equipment, experts have discovered a huge wood henge in the great circle and surrounded by a massive ditch.

Wood henges are currently thought to be circular covered temple buildings erected by the local tribe expressly for the purpose of manipulating the supernatural. Their size acted as a status symbol for the tribe so from the size of this one we can assume that the tribe must have been extremely confident and in command of substantial local resources. People would come from all the surrounding districts to make offerings at a temple of this nature. The bigger the temple the more likely you were to get your desire granted by the gods. At this 5000-year-old site the feasts and rituals would have been quite structured and presided over by priests. As they fell into disrepair they would have been replaced by stone structures such as we see at Stanton Drew and Stonehenge.

Already there are calls for this major archaeological site to receive the same attention as its well-known neighbours, with full "visitor centre" facilities etc. But access is limited. The site itself is on private land, the roads around the village of Stanton Drew are small and tortuous. No doubt the pagans who like to go there to practice their rites would like the site to remain as it is. Frankly, I agree with them.

……………The Piper laughed in the cold light of dawn. He raised his pipe again to his lips and played a haunting melody. The dammed souls of the wedding guests gathered close around and followed him into the mists of the netherworld.

The Harper returned to the field later on Sunday morning. In his haste to leave he had left behind his hat and now he thought to retrieve it. He found his hat easily; it had been placed jauntily on the top of one of the many stones that now stood in the field. The Harper counted the stones and though he could not be sure there seemed to be about forty six. "How odd," thought the Harper, "There were about that many wedding guests…".  He ran from the field and never went near the place again.

The Song of Stanton Drew

Midsummer eve it fell on a Saturday
Sue and William went to be wed
They had music played by a fiddler'
"Let's go dancing,! William said.

Midnight struck and then said the fiddler
"Dancing on a Sunday wouldn't be right,"
Sue gave a laugh, "Don't care if to Hell I go
I'll find another fiddler tonight."

Off went the fiddler, left them all grumbling,
Then another fiddler came along the way.
"You'd like to dance and I'd like to play for you"
Tunes he played both merry and gay.

"Stop" cried the dancers, "NO" cried the fiddler,
He kept on in spite of their moans.
They couldn't stop their jerking and a stumbling,
Then in a flash, He turned them into stones.

Stanton Drew in the County of Somerset
That's where the Devil played at Sue's request,
They paid the price for dancing on a Sunday.
Now they are standing evermore at rest.

Back to Home Page