In a new twist to the ever developing saga of the Stonehenge Project the Druid know as King Arthur Pendragon proposes to throw down the gauntlet in a challenge to the Government of the proposals for the scheme. He issued the information below on 9th Feb 2006. 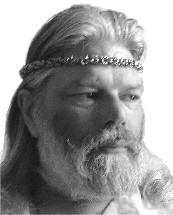 A fully Robed and Sworded Druid is set to throw down the Gauntlet to H.M. Government.

Arthur Pendragon, Senior Druid, and veteran of many environmental campaigns and protests is to challenge the Government’s decision not to go ahead with the published scheme of road improvements at Stonehenge, in the light of increasing costs.

One of the proposed plans put forward by the Highways Agency is a Twyford Down-type ‘cut and cover’.  “This”, says Arthur “is wholly unacceptable to the Pagan community and unless they have budgeted for the biggest protest in Europe, they should not even consider it”.

He will make his views known in no uncertain terms as only a fully Robed Druid Swordbearer can.

Forget Fathers for Justice, look out for Druids for Damocles!

For more information contact Arthur personally
Tel: 07840 277812
or email pendragon@warband.org
or write to him at: 10 Sine Close, Farnborough, Hampshire, GU14 8HG.
or visit the website at: warband

Back to Stonehenge Project page

Back to Home page